Coping with the darkness of trauma

When Jordan went to his very first Landing Strong group, someone made an analogy about post-traumatic stress disorder that stuck with him.

“They said PTSD is like being in a dark area and there’s a big gate and you’ve got to make it through the gate,” he explains. “At that time, I was like, I can’t even see the gate. It’s just darkness. But that stuck with me these past two years. I’m now on the other side of that gate. The gate is still open, the darkness is still there, but I’m no longer just engulfed by it.”

Helping those injured in the service of others

“It’s for people who have been injured as they’re doing their job, while they’re acting in service of others,” says Seagram. “These are mission-driven folks who are hardwired to be helpers and not necessarily as quick to help themselves.”

Bringing people together to heal

Seagram says while she was seeing really nice steps forward in the recovery process in the one-on-one work she was doing in her practice, it was the addition of group programs where she began to see big changes.

“Almost everybody says I can’t be in a group. I tell them that’s what everybody says. Individual therapy is a fantastic way to start, but if you want quick recovery and a fuller recovery, a group process is a really essential component of that, because really, I think you need community in order to have complete healing.”

Tom*, a police officer and participant, says that part of the reason groups are so important is because of the sense of loss that happens when you have to step away from a job you love or from your sense of purpose. 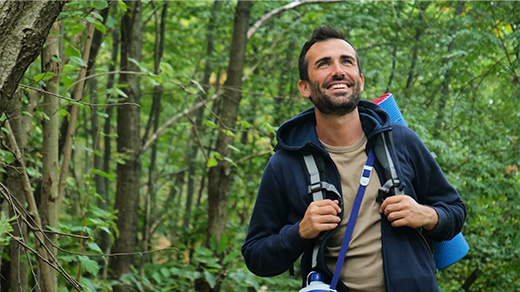 A return to self

When Landing Strong’s multidisciplinary team starts working with participants, they have to overcome the participants’ feelings of isolation and hopelessness.

“A lot of people say I’m broken for life and we say no, you’re just injured,” says Seagram. “So there’s something that really brings joy to my heart when they start saying, wow, I caught a glimpse of myself and I haven’t felt that way since basic training, since before Afghanistan. You know, they start catching glimpses of themselves. Their pre-injured self. And that’s when you can see something really important shift.”

As for Jordan, he’s happy to be on the other side of the gate. “Before I was just angry, at everything, about everything, so it’s made a huge difference in my relationship with my wife. My kids like me, they want to spend time with me, whereas before I was always the scary dad. That has been huge. Career wise, I’m still working on it, but my home life is amazing because of the work I’ve done through Landing Strong.”

For more information about Landing Strong, please visit their website.

*Some names have been changed.